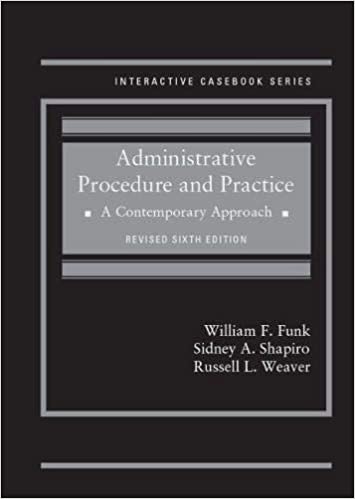 The Revised 6th Edition of this popular casebook contains an omitted APA section but is otherwise identical to the 6th Edition. Like previous editions, it focuses on real problems and real administrative practice. Problems serve as the primary pedagogical tool, including problems that do not involve courts. The book raises ethical issues distinctive to government lawyers, requires students to parse statutory and regulatory text in solving problems, and orients the course around administrative law practice rather than theory. While theory is not ignored, the book focuses on reality-based problems that put theory in context. It includes the most recent important Supreme Court and Courts of Appeals cases, including King v. Burwell, with its rejection of Chevron when a case involves interpretive questions of deep “economic and political significance”; Perez v. Mortgage Bankers Ass'n, which overruled the D.C. Circuit's Alaska Hunters line of cases; Lexmark International's attempt to clarify the meaning of prudential standing; Spokeo, Inc. v. Robins, with its rejection of standing absent concrete injury to a person, even when a person's statutory right has been violated; and Corps of Engineers v. Hawkes' elaboration of the test for finality.